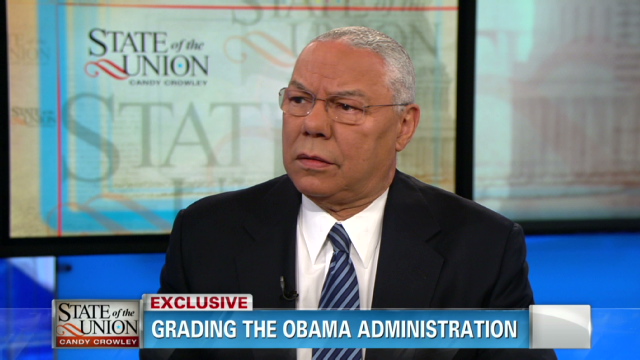 Exclusive: Colin Powell on State of the Union with Candy Crowley

— “I think he’s got a way to go… we didn’t elect Superman, we elected a human being, Barack Obama…”

In an exclusive interview on CNN’s State of the Union with Candy Crowley, retired four star General and former Secretary of State Colin Powell discussed President Obama’s first two years in office and whether he will vote for Obama again in 2012. Powell also spoke about the war in Afghanistan, the discussion about public discourse in the wake of the Tucson shootings and dismissed the possibility that he would be interested in a position in the Obama administration.

Links to the full transcript, embeddable video and CNN Political Ticker links are after the jump.

A full transcript of the interview can be found here.

Powell on his political future

Powell on drone strikes in Pakistan

‘Getting to Know’ Colin Powell

CNN Political Ticker: Powell: Obama still has work to do