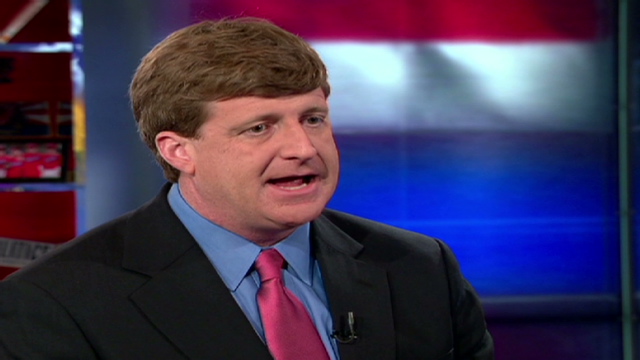 John King, USA: Patrick Kennedy, “The idea is the legacy lives on in a myriad of ways and through many public officials.”

Today on the 50th anniversary of John F. Kennedy’s inauguration, CNN chief national correspondent and anchor John King interviewed Patrick Kennedy the former U.S. Representative for Rhode Island. The two discussed a variety of topics including, mental health and the possibility of more Kennedys in politics.

JOHN F. KENNEDY, 35TH PRESIDENT OF THE UNITED STATES:  So let us begin anew, remembering on both sides that civility is not a sign of weakness and sincerity is always subject to proof.  Let us never negotiate out of fear, but let us never fear to negotiate.

JOHN KING, HOST, “JOHN KING USA”:  That was 50 years ago today in President John F. Kennedy’s inaugural address, on a day of tributes and reflection here in Washington, here’s a piece of American political trivia.

For the first time since the Truman administration, there is not — not a member of the Kennedy family in the United States Congress.  The last one to serve was Congressman Patrick Kennedy, the nephew of President Kennedy and the son of the late Senator Edward Kennedy. Congressman, thanks for joining us.

KING:  You just left.  You decided not to run for reelection.  As you watch this new Congress gear up, the feisty debate already about repeal of health care, the spending battles to come. Do you miss it?

KENNEDY:  Well, I made a decision long ago to make a decision to leave Congress and I’m glad I did.  I — I feel good about my choices to go forward.  And one of them is — by which is to mark John F. Kennedy’s 50th anniversary of his Moon Shot Address, which encapsulated an idea of what was possible in America if we set our sights.  In that time, going to the moon and coming back was fanciful.

Now, I’m trying to mark his 50th and his Moon Shot to say we need to go to inner space, unlock the mysteries of the mind and bring cures to the millions of people, like my Uncle Sarge, who had Alzheimer’s and others who have Parkinson’s and autism and all the array of neurological disorders and say let’s do what he did for the moon shot and do it for the mind shot, to unlock these mysteries of neuroscience and free millions of people, most of whom, the newest population, are our nation’s heroes, our veterans, our soldiers —

KING: — let’s dig a little deeper on that, because you know, as you start this effort, this advocacy effort, you do it at a time of dwindling resources.  The federal government is cutting back.  Mental health services, community health centers, are always the first or second thing to go when state and local governments cut back. How hard is the challenge, taking on this challenge at this tough moment, financially?

KENNEDY:  Well, when we have a soldier caught behind enemy lines by al Qaeda or Taliban, we would think of nothing — we won’t ask how much does that cost to bring them home.  Well, our soldiers are behind enemy lines now.  They’re prisoners of their war injuries.  The signature wound of this war is traumatic brain injury.  They’ve come home in body, but, many of them, they have not come home in mind because they’re still plagued by their war injuries.

KING:  It’s a conversation that comes up in the context of the veterans coming home — you’re exactly right about that — and the generational challenge the country faces.  It’s a conversation we’ve also had in recent days because of the tragedy in Tucson, the searching of Congresswoman Giffords, your friend, the — the fatal shootings of six others there.  Many saying when they look at the profile of the suspect, he had some disturbances in community college.  There were many people who felt threatened.  And there’s a conversation much like after the Virginia Tech shooting, should somebody have seen the signs of mental disorder, of some distributed personality and grabbed this guy by the ear and gotten him health — help.

What goes through your mind when you think of that?

KENNEDY:  Well, the — the warning signs were many for this fellow.  What happens as a country, our instinct, if someone falls over, is to help them and lift them up.  But if you have a mental illness, if you act strange, we look the other way.  We turn away from it.  And that’s what we did in this young man’s case and now we’re reaping what comes from ignoring these problems because they’re so stigmatized.

KING:  Is that a government issue, a family issue, a community issue?

KENNEDY:  It’s a societal issue, because until we de-stigmatize wounds of the brain, suicide rates for our veterans and — and actually for our soldiers, more soldiers took their own lives than were killed in action in the month of June.  Even if it’s just one month in the war, the notion that suicide is the biggest enemy we have should open our eyes to say, you know, everybody can benefit from us doing this search for the benefit of the soldier, but everyone will help and benefit from it, as well.

KING:  Let me ask you, your family has, sadly, is all too familiar with gun violence. What went through your mind when you hear about Congresswoman Giffords and the others in Tucson?

KENNEDY:  Well, the impact on the people who are closest to her family and — and loved ones.  I was lucky I had my father.  I grew up with a father.  My cousins didn’t.  The biggest toll for — for those who are affected are the family members.  And that’s why I’ve always said it’s not the statistic of how many people are killed or shot or wounded, it’s the ripple effect of all those people that loved them.  And now America knows Gabby Giffords and so everybody is affected.  And they know this is not something that we can just turn away from.

KING:  Do you ever feel threatened or were you ever threatened in that way when you were in the Congress?

KENNEDY:  All of my colleagues have, I think, really, over the course of the last couple of years, received a heightened number and level of threats than we had ever witnessed before in our political lives.  I know that was the case for me, but it was the case for every one of my colleagues.  And so the discussion about changing the dialogue is — is an appropriate discussion to have.

KING:  Let’s — let’s reflect on this day and the moment a little bit — 50 years since the inauguration of your uncle, President John F. Kennedy.  And there are ceremonies around town.  You will be at a big one tonight at the Kennedy Center here in Washington.  At a ceremony earlier today on Capitol Hill, Speaker Boehner, the new Republican speaker of the House, made note of the fact that I just mentioned, that no Kennedy in the Congress for the first time since the Truman administration and he had this to say.

REP. JOHN BOEHNER (R-OH), SPEAKER OF THE HOUSE:  This is the first Congress to convene without a Kennedy since the Truman administration.

KING:  A big smile from Caroline there.  It was thought that she might enter elected politics last time and she didn’t. What about the next generation of Kennedys? Will you ever run yourself? And when you look around at your cousins, when will we see a Kennedy on the ballot again?

KENNEDY:  Width anybody could have gone to that rotunda reception or witnessed any of these remembrances of my uncle and not understood that his legacy is living on through many, many people who only got into politics because they heard his call to ask what they could do for their country.  In a — in a very substantive sense, you know, I’d be voting the same way as someone else who also felt strongly about that legacy and that ideal.

We’re interchangeable.  The idea is the legacy lives on in a myriad of ways and through many public officials.  Today, you heard our leader from the Senate, Harry Reid, talk about how he was personally — you had our speaker talk about how she was influenced.

I meet friends of mine on the Republican side of the aisle who tell me that — Representative Pence — told me that they were inspired to go into politics — Joe Scarborough.  He was instrumental in helping us name the Robert F. Kennedy Justice Department.  I mean this is across party affiliation.  The idea is still an idea that’s universal and that’s for people to try to do something for their country.

KING:  What about Vicky Kennedy? There are a lot of people in Massachusetts pressuring her to run for your dad’s seat, to try to take it away from Scott Brown in the next election. Will she?

KENNEDY:  Well, she said no.  And my cousin, Joe — you know, actually, my cousin Joe’s son is a prosecutor down on the Cape, very inspiring young man, did a lot better than I did in school, the top of his class Stanford, Harvard.  And he went to the Peace Corps, by the way, speaks fluent Spanish.  If I ever had to identify someone who’s got a perfect profile — and I hope he — if he ever chooses to, I’ll certainly — like all members of my family, be there to help him.

KING:  So soon is what you’re saying —

KENNEDY:  I think all members of my family are — are involved in some way or another in helping.  My cousin, Timothy Shriver, runs Special Olympics, with his younger brother, Anthony, best buddies.  My cousin Bobby, environment.  I mean I could go on and on.  Everybody is doing something.  And that’s what happened with this Peace Corps, is that people understood that we’re all part of the answer, not the — you know, if we’re — if we’re engaged.  We’re part of the problem if we don’t do anything and just sit back.

And that’s that “ask not.” That is the most powerful part of that speech, because it says all of us have a responsibility.  It’s not just for the politicians, but every single citizen in America, to do their part to make this a better country.

KING:  Patrick Kennedy, we appreciate your time on this special day. And we wish you the best in your —

KING: — in your latest work.  It’s very important work. Thank you for coming in.

and @JohnKingUSA on Twitter for daily updates on the program.***