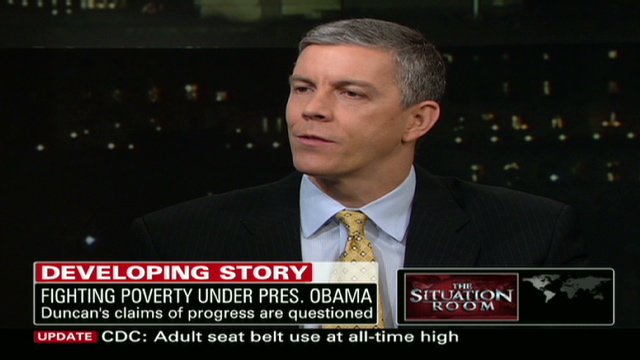 Transcript: Arne Duncan on The Situation Room with Wolf Blitzer

U.S. Education Secretary Arne Duncan spoke with CNN’s Wolf Blitzer tonight on education reform, possible cuts and on working with the new Congress. This interview aired tonight in the 6 p.m. ET hour of The Situation Room with Wolf Blitzer. A transcript follows.

WOLF BLITZER, HOST: Let’s get back to our interview with Arne Duncan, the Education secretary. Mr. Secretary, “The New York Times” suggesting Republican leaders in the House want to cut perhaps 20 percent of your budget as part of their effort to cut down $100 billion in domestic spending this year. Are you ready for that kind of action?

ARNE DUNCAN, U.S. EDUCATION SECRETARY: That would be bad for the country, bad for our long-term economy, bad for education. Eight million young people currently going to college would receive less financial aid, less Pell Grants. We need many more graduates, we don’t need people dropping out of college due to financial stress. Millions of students with special needs wouldn’t get the services they need. Poor children wouldn’t get the services they need. Wolf, we have to educate our way to a better economy. We have to invest. We have to invest wisely, we have to invest in a reform agenda. We can’t afford to take a step backwards.

BLITZER: What can you afford? How much of a budget cut can the Department of Education afford, assuming what they call domestic discretionary spending has to be cut?

BLITZER: All right. Let’s talk about this article you wrote in “The Washington Post,” because you suggested that there was an opportunity to improve education by dealing with poverty, which is the huge source. There was criticism of your article coming in from Professor Stephen Krashen of the University of Southern California, saying, “Duncan gives the impression that overcoming poverty happens all the time under his administration. There is no real evidence that it happens at all.” Is there any evidence that you are overcoming poverty?

DUNCAN: Wolf, that’s one of the biggest challenge our country is still — folks to believe, that somehow poverty is destined. I spent my whole life working in the inner city in a desperately poor community. I know those challenges as well or better than anyone. Bright stars and young people from very poor communities, very tough family situations, lots of violence in the neighborhood. Despite those very real obstacles, with long-term support and guidance and real education opportunity, those people go on to do extraordinarily well.

BLITZER: Is there any, like, real scientific evidence of that other than anecdotal evidence?

DUNCAN: There’s evidence all over the country. You look at what Geoffrey Canada is doing to the Harlem Children’s Zone, where they’re basically closing the achievement gap. We’ve never had more high-performing, high-poverty schools around the country. That’s why I’m so hopeful. The challenge, Wolf, is those kinds of opportunities aren’t at scale yet. We have to invest in those best practices, we have to create more of those opportunities. Great principals, great teachers make a huge difference in students’ lives.

BLITZER: The other criticism, he says, more of this testing is a disaster. He says, “We are about to make a mistake that will cost billions and make school life even more miserable for millions of teachers and students. The only ones who will profit are the testing companies. We should be talking about reducing testing, not increasing it.”

DUNCAN: We need better evaluations. And right now, in part thanks to Race to the Top, we have 44 states working together and two consortia coming up with the next generation assessments. Teachers, parents, students want real information. They need to know, are students learning? Where are they improving? Where are they not? Where do they need more help? Those next generation of assessments are going to help us to get there. That leadership is being provided at the local level, not by us in Washington.

Here’s what’s so shocking. In December, “USA Today,” the newspaper, had these statistics from the Organization for Economic Cooperation and Development. I’ll read it exactly. “Out of 34 countries, the United States ranked 14th in reading, 17th in science, and 25th in math.” That’s horrendous.

DUNCAN: Wolf, that’s reality. And that’s why we’re pushing so hard for real change, for real reform. We cannot as a country celebrate and say we’re 25th in science. In a knowledge-based, globally-competitive economy, we have to do so much better educationally, so anyone who’s defending the status quo, anyone who is saying we don’t need change is part of the problem.

BLITZER: And the other problem is the amount of money we spend and the results we get. Let me read to you from “USA Today.” “The United States spends more per student on average than the other countries. In the 2009 PISA study, only Luxembourg spent more per student. The report notes that countries like Estonia and Poland perform at about the same level as the United States, while spending less than half the amount per student.”

DUNCAN: If you looked at what the high-performing countries are doing, there’s so much we can learn — the Singapores, the Finlands, the South Koreas.

BLITZER: How do they do it and we don’t?

DUNCAN: In South Korea, Wolf, teachers are known as nation builders. We need to make teaching a revered profession. We need to do a much better job of respecting and valuing teachers. We need to bring that next generation of great talent in. In those countries, teachers are looked upon as doctors and lawyers. Somehow in our country, teachers have been disrespected, they’ve been devalued. We have to get away from that. With the baby boomer generation retiring, a million new teachers are needed around the country. We have an amazing opportunity to transform the workforce.

BLITZER: Because as you say, in the global marketplace, if we don’t improve our education levels, we’re going to go down and down and down.

DUNCAN: Jobs just continue to go overseas. We’re fighting for our country. We’re trying to make our country great again. This is about nation building. The only way we get there, Wolf, is through smart investment, targeted investment, and education reform.

BLITZER: The former governor of Florida, Jeb Bush, he wrote in “The Wall Street Journal” this week. He said this: “If a public school doesn’t measure up, families have an unprecedented array of other options: public school choice, charter schools, vouchers for pre-K students, virtual schools, tax credit scholarships, and vouchers for students with disabilities.” Are you with Jeb Bush on all these things?

BLITZER: What if there’s no great public school, and the kids — but there’s a good private school or a Catholic school in the neighborhood, but they need a voucher to go?

DUNCAN: So what we’re doing, Wolf, first time around the country, as a country we’re turning around 700 chronically underperforming schools. For so long, we just watched 40 percent, 50 percent, 60 percent of children drop out. Seven hundred schools are being turned around as we speak, schools that, historically, were dropout factories. You’re going to see very, very different results. We can’t just save one or two children, Wolf. We have to save that whole school, and ultimately that entire community.

In far too many areas, those dropout factories have been there for decades — 10, 20, 30 years. The country now is finally having the courage, and we’re providing the resources to challenge that status quo.

BLITZER: Let me wrap up with a new reality here in Washington, a Republican majority in the House. They want to slash domestic spending, including in the Department of Education, your department. Where do you go from here?

DUNCAN: We all work together. I think there’s great leadership, Republicans, Democrats, in the House, great leadership in the Senate. No one is satisfied with the status quo. We have to educate our way to a better economy. We all have to come together for —

BLITZER: Can you work with John Boehner.

DUNCAN: Thank you so much.

BLITZER: Arne Duncan is the Secretary of Education. Appreciate it very much.