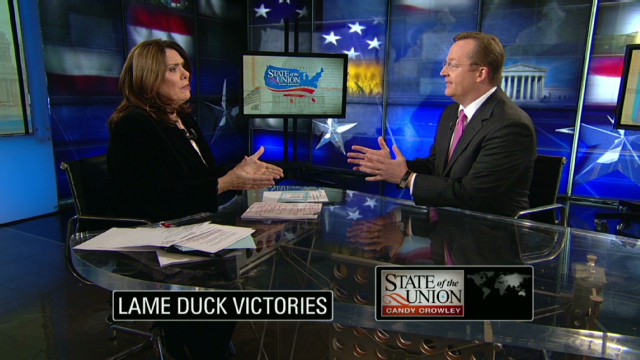 Transcript: Robert Gibbs on State of the Union with Candy Crowley

In an interview airing Sunday, December 26 on CNN’s State of the Union with Candy Crowley, White House Press Secretary Robert Gibbs spoke about legislation passed by the lame duck congress, what’s next for 2011 and the last time President Obama smoked a cigarette. A full transcript of the interview follows.

Happy Holidays to you.

CROWLEY: Thanks for being here.

Let me take just a — a slightly different view of the great, great month for the president — and it was.

But let me argue that there was something hanging over his head, and that is you all didn’t want January to come while you watched every American have a paycheck that got smaller.

So there is nothing like something hanging over your head to get something done.

What about this lame duck session encourages you that when you get to big ticket items and cutting spending and other things, immigration reform, that you’re actually going to be able to duplicate the kind of, let’s call it cranky bipartisanship that we saw in December.

GIBBS: Well, I do say this, Candy, I think you’re absolutely right, that I think neither party wanted to see taxes go up on middle class families. The president was…

CROWLEY: Which will go over.

GIBBS: Right. And the — look, the president did not want to see tax cuts extended for millionaires and billionaires, but we didn’t have the votes for our position to prevail. You’re right, we are going to have some very tough issues coming into the next Congress and over the next couple of years.

I think a couple of things can help what has happened in the last few weeks bleed over into next year.

I — I think — and you heard the president say this at his year end news conference. There was a responsibility of government that I think the Republicans got in the November elections and they began to understand that responsibility a little bit more in this lame duck than they had in the previous, quite frankly, 18 or so months. They realize now…

CROWLEY: Because they didn’t have the responsibility in the last 18 or so months that they have now?

GIBBS: Exactly. Exactly my point. They — they — they understand that, to a certain degree, they have had, over the past few weeks in this lame duck session — and they’re definitely going to have on January 5th, responsibility for running half of Congress. They can’t afford any longer to just simply sit and say no. They have to be part of a constructive conversation.

And I think that’s what — exactly what happened. I think, also, everyone put aside politics and partisan interests to put forward what was best for the American people. There will be plenty of time for an election in 2012 and for elections beyond. Let’s resolve to make 2011 a year in which both political parties can put aside future political gains and decide to concentrate on what’s best for the American people.

CROWLEY: I just never thought of you as an optimist. But let’s — let me say this. Mitch McConnell, the Senate Republican leader, told me in a recent interview, I said, so where do you want — what next?

Where can you see yourself coming together with the president?

He said entitlement reform. I can see us doing that.

Are you game at the White House for entitlement reform and what does that mean specifically?

Would you agree to a larger — a higher age for retirement and Social Security?

Would you agree for some sort of means testing of Medicare?

Where are you all willing to look?

GIBBS: Well, look, I think you’ve touched on what we need most of all, and that is a willingness for both political parties to sit at that table, like we did for the tax agreement, like we did for the START agreement, though we didn’t have Senator McConnell’s support on that, and be willing to discuss issues. The president obviously wants to strengthen our entitlement programs for future generations.

We have to do something about our mid and long-term deficit and debt problems. We have an education plan that has to be re-authorized every few years. That’s coming up next year and I think that provides an occasion for bipartisanship.

But I — I think most of all, each of these two parties — and we are certainly hopeful that the Republicans come into next year with a willingness to sit down at that table and begin having a discussion about how we’re going to make progress.

Sometimes the first step is the biggest one.

CROWLEY: So, you’re going to have to cut programs. I think everybody does know that.

Where — so you have, it seems to me, some sort of competing things here. You have the base of the party that says, wait a second, don’t cut Medicaid, Medicare, Social Security. You know, the tax cuts are what’s really to blame for this. And they’re afraid the president and they are going to get the blame for this.

GIBBS: Well let’s understand what we got, as Democrats and progressives, out of this tax agreement. Middle class families, as you started off this interview by saying, won’t see their tax bill go up. Middle class families will see money directly in their pockets as a result of a payroll tax cut. And for people who have lost their jobs as a result of some reckless decisions that were made on Wall Street aren’t going to have to play politics or have politics played with them in terms of their unemployment benefits.

We could have fought this for a few months. We could have hoped that the polls didn’t blame everybody, as they would have, for people’s taxes going up. And when we come back into a Congress in January and probably not gotten half of what we got…

CROWLEY: As good a deal.

And that tax agreement was the very best thing we could have done for our economy.

CROWLEY: A couple of quick issues.

The first is, we are a month away from being a year late in closing down Guantanamo Bay prison.

When is that prison going to close?

GIBBS: I don’t — it’s certainly not going to close in the next month. I think it’s — I think it’s going to be a while before that prison…

GIBBS: — closes. I think part of this depends on the Republicans’ willingness to work with the administration on this.

And the question is, are Republicans willing to listen to General David Petraeus?

Are they willing to listen to others in the national security arena that have told us and will tell them and have, quite frankly, told the public that al Qaeda recruits young people to do harm, to try to blow up airplanes, to blow up themselves and kill others, they use that as a recruiting tool.

And the question is, are we going to continue to have and let al Qaeda use Guantanamo Bay as a recruiting tool?

CROWLEY: The Republicans did not figure into the president’s promise to close down Guantanamo Bay when he was campaigning. You could close it down, but you’re not closing it down.

So what is holding you back?

It’s that you don’t have anyplace to put them, correct?

GIBBS: Well, obviously, there are prohibitions, legislatively, on — on the transfer…

GIBBS: — of — of some of the prisoners that are there into some part of this country. Some would be tried in federal courts, as we’ve seen done in the past. Some would be tried in military commissions, likely spending the rest of their lives in a maximum security prison that nobody, including terrorists, have ever escaped from. And some, regrettably, will have to be indefinitely detained. I say regrettably not because it’s a bad thing for — necessarily for — for them in terms of the fact that they’re very dangerous people and we have to make sure that even if we can’t prosecute them, we’re not putting them back out on the battlefield.

CROWLEY: Why is it taking so long to replace Larry Summers, who was supposed to leave in the fall, a top economic adviser to the president?

Where is his replacement?

GIBBS: Well, first and foremost, Larry continues to — to be on the job and helping the president and the economic team and will do so through — through the end of the year. I expect that the president will make an announcement on a new NEC director probably the first week or two weeks after Congress comes back into session.

GIBBS: I think, obviously, it’s a — it’s an important part of our economic team. And the president wants to take some time to make a good decision because, as you mentioned, we have had a lot on our plates the last couple of weeks.

CROWLEY: You have. And — and, quickly, do you expect big changes in cabinet — cabinet shuffles?

GIBBS: I — I don’t expect, quite honestly, big changes. I think we’ve had a — a very capable and — and good cabinet that has helped move the president’s agenda forward. I think there’s obviously a lot that has to be done at Treasury to implement financial reform, at HHS to implement health care reform. And I think we have a very talented team.

CROWLEY: And the president is running for reelection.

Can we write that sentence?

GIBBS: I don’t — he has not told me that, but I would assume most of — most — most people are planning for that likely to happen, yes.

CROWLEY: Certainly you have David Axelrod leaving the White House to start up the reelection, so it would come as news to you if the president wasn’t going to run for reelection?

CROWLEY: Glad to have you here.

GIBBS: Thanks for having me.

Tags
CNN Politics / State of the Union with Candy Crowley