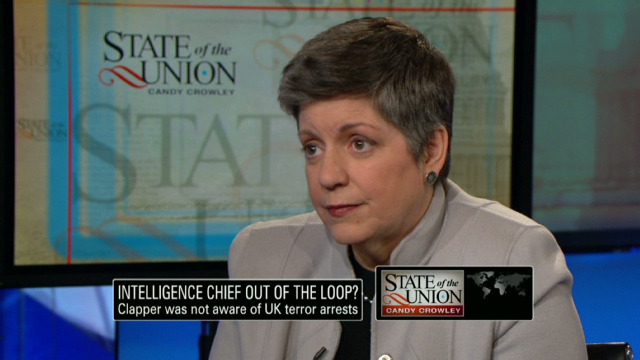 Transcript: Janet Napolitano on State of the Union with Candy Crowley

In an exclusive interview airing Sunday, December 26 on CNN’s State of the Union with Candy Crowley, Homeland Security Secretary Janet Napolitano spoke about enhanced pat-downs at airport security and other efforts to combat terror attacks. A full transcript follows.

Thank you so much for being here with us on a holiday weekend.

CROWLEY: I want to talk first about pat-downs. It’s been about six
weeks, maybe, since we noticed the enhanced pat-downs.

What have you learned since then about what works and doesn’t work?

NAPOLITANO: Not for the foreseeable future. You know, we’re always
looking to improve systems and so forth. But the new technology, the
pat-downs, is just objectively safer for our traveling public. But in
the meantime, I think it’s important to note that what you see at the
gate with the pat-down and the new machine is — it’s just part of a
longer system that begins for international travelers, actually,
internationally, with new partnerships that we have developed,
particularly over the past year, with enhanced relationships with the
private carriers, with enhanced ability to match ticketing information
against other lists that we have.

So there’s a whole kind of intel-based system that’s going on and then
we get to the actual gate.

CROWLEY: When you say that this has helped, we also know, from various
reports and — and people speaking on background — an ABC report out
that 70 percent, sometimes, at majority airports — there are some
majority airports who had a 70 percent failure rate at detecting guns,
knives, bombs, that they got through in your tests that you all do to
see how good security is.

So how good can it be when you have major airports with a 70 percent
fail rate?

NAPOLITANO: Well, first of all, I think I know the tests to which you
refer. Many of them are very old and out of date and there were all
kinds of methodology issues with them. Let’s set those aside.

What we know is that we pick up contraband now and — we pick up more
contraband with the new procedures and the new machinery.

CROWLEY: Just people who just are discouraged, thinking they’d be found
out —

CROWLEY: — is that what you’re talking about?

NAPOLITANO: And then what we have to do is say, well, what other ways
are they thinking to commit an act, because our job is not only to
react, but to be thinking always ahead, what could be happening. And so
we have enhanced measures going on at surface transportation, not
because we have a specific or credible threat there, but because we
know, looking at Madrid and London, that’s been another…

CROWLEY: That’s what you’re talking about?

NAPOLITANO: — that’s been another source of targets for terrorists.
It means, as we make the — the land borders harder to cross from a land
border crossing standpoint, that we need to be looking out into our
coasts and to the waters. And so that brings that into play.

So I guess the overall message is everything is objectively better than
it was a year ago, particularly in the aviation environment. But we’re
also looking at addressing other areas…

CROWLEY: And how do you measure that, I mean, because if we have a
failure rate, we — we have, anecdotally, the man who had a — a license
for a gun, forgot that he had it and something– it was a
Glock. He got all the way to his hotel room at the other end of the
airport trip and said holy cow, a Glock went through airport security,
not in his luggage, as he — when we went through, putting it through
the — the machine.

So that tells me — and there is some criticism that perhaps you all
have relied too much on let’s get the latest technology, let’s bring in
this new bell and whistle, let’s do this, let’s do that, all of which
are good, but that you don’t have people that are trained well enough to
spot some of this stuff.

NAPOLITANO: Well, first of all, we process one-and-a-half, two million
passengers per day. And if…

CROWLEY: But it just takes one Glock…

NAPOLITANO: — if there were an incident, then it’s immediately looked
at as to well, how was that missed?

And if there needs to be retraining of individuals involved or if
there was a failure in the equipment, that’s immediately addressed.

CROWLEY: I don’t think it’s about hard work. I think it’s just about
people saying if these things are getting through at a failure rate —
and I’m assuming you still have a failure rate — you know more than
anyone that one is really too many, that — that perhaps there needs to
be more training, not that they aren’t working hard or doing their jobs
to the best of their ability.

NAPOLITANO: Well, you know, in law enforcement, we’re always looking at
ways to improve and increase training. But I don’t think you can
extrapolate from one anecdote to an entire system, that there’s failures
in the entire system. So…

CROWLEY: Well, what is your fail rate?

CROWLEY: What are you finding?

NAPOLITANO: Well, my fail rate is zero. I mean we want nothing to get
aboard a plane that is not safe. So when something does get aboard, if
something does get through the system, and a — and, again, as I
explained, it’s many, many layers before you even get to the
Magnetometer or the new machine.

If something does get through, then we immediately go backward and say,
OK, what happened here and — and repair that deficiency.

CROWLEY: When you say that you also have to be proactive, not just
reactive, what is coming down the pike?

NAPOLITANO: Well, one of the things we look at is what other avenues
might they select as…

NAPOLITANO: — as a target. So we look at other kinds of
transportation venues. We look at so-called soft targets, the hotels,
shopping malls, for example, all of which we have reached out to in the
past year and have done a fair amount of training for their own employees, as well.

CROWLEY: You have started this — the safe — “see something, say
something” slogan, asking citizens to get involved, telling this to
store owners, you know, that kind of thing.

I — I feel like this is one of those kinds of things where, let’s say I
have a neighbor from Yemen and he’s having late night parties at his
house regularly on Thursday night.

Do I say something?

I mean I — I feel like this is so fraught with turn — ratting your
neighbor out.

NAPOLITANO: You know, it turns out — “see something, say something”
has been in — in place in several major cities in the United States for
years. I mean it actually started post-9/11 with the New York
Metropolitan Transit Authority. And they’ve had it in place. And it’s
been in place in some other communities.

All we have done is expand it. And the reason we have is because we
want the citizenry of the United States to be alert, not alarmed, but
alert — alert to situations, alert to unattended packages at the
airport or unattended bags at a bus stop, alert to things that are
highly unusual that would, for example, if you’re a street vendor in New
York and you see a car you haven’t seen before parked and there’s smoke
coming out of it…

NAPOLITANO: — suggest that you should let law enforcement…

CROWLEY: But do you…

CROWLEY: Will — do you think that there might be some sort of over
reaching that you could turn in — so this person is acting suspiciously
or that person is doing this. It just sounds very Big Brother to me,
turning in the next door neighbor or the guy who…

CROWLEY: — just walked off in…

NAPOLITANO: — it’s not. It depends on the common sense of the
American people. I think they have common sense. And it depends on,
again, getting a head — getting through this notion that our safety,
our security and — and the world we live in today is a — a shared
responsibility. The Department of Homeland Security obviously has a
huge responsibility there, as does the federal government as a whole, as
does state and local law enforcement, as does the private sector, as
does our work with our international partners.

But citizens themselves can pay — can play an important role, as well.

CROWLEY: Let me ask you about DNI, James Clapper. A lot has been made
about the fact that he did not know, several hours after the fact, of
the 12 arrests in Britain of suspected terrorists. How did he not know? How did that happen?

NAPOLITANO: Well, I think he’s been pretty up front about it. He had
been working on the Hill on issues involving START and North Korea and
went into the interview before his briefer had a chance to brief him.

CROWLEY: — you just might be a little disconcerted and say well,
I thought now we were all talking together and all of a sudden the —
the DNI does not know of a major terrorist bust in — in Britain.

NAPOLITANO: Well, let’s — let’s be fair. It — I knew. John Brennan
knew. We also knew there was no connect that had been perceived to
anything going on in the homeland and that we were in perfect
connectivity with our — our colleagues in Britain.

So one of the things I think that should be very clear to the American
people is that those of us in homeland security who needed to know, we knew.

CROWLEY: Janet Napolitano, Homeland Security secretary, thanks for
joining us.