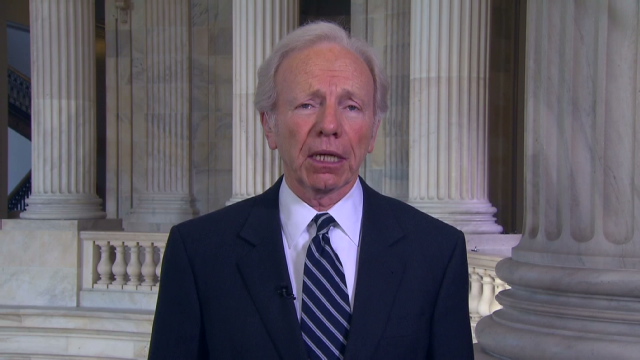 SEN. JOE LIEBERMAN (I), CONNECTICUT: Well, I always believe you shouldn’t take anything for granted until it’s actually done. In this case, since the roll is called and the votes are cast. But there’s no question, we have commitments, John, to support the repeal of “Don’t Ask, Don’t Tell” from a bipartisan group of senators that numbers over 60 and, really, that’s quite remarkable. I’m very grateful. I’m grateful to Senator Reid, who made the decision to take down, momentarily, the consideration of the START nuclear arms control treaty and go to “Don’t Ask, Don’t Tell.” We’ve got the votes. It’s time to get it done. It’s an injustice and it hampers our military effectiveness.

KING: I want to talk about the politics and the process in a minute, but step back for a minute.

KING: This policy has been in place for 17 years.

KING: What do you think it will mean, culturally, not just for the military, but for the country?

LIEBERMAN: Well, I mean, for the military, it will mean that Americans who happen to be gay and lesbian who want to serve our country and are capable of doing so can do so without fear of — of being pushed out simply because of their sexual orientation, not because they were ineffective soldiers or because they violated the code of military conduct.

In fact, 14,000 members of the American military in the last 17 years have been discharged only because either they admitted or somebody said they were gay or lesbian, and that’s just wrong. But in a larger sense, I think, really, this is — this is a civil rights action and — and in the best sense of the — of America. This will allow gay and lesbian Americans to be called what they — what they are — what they want to be called, which is Americans, not gays or lesbians, Americans who want to serve our country.

And I think we’ve come to a point where neither your — your race, your gender, your nationality, your religion or your sexual orientation should deprive you of the opportunity and honor of serving our country in the military and being called what — what they are, patriots.

KING: It is controversial at the moment, as most big things are. When you — we look back now on women’s rights, including the right to vote, when we look back now on the civil rights movements and the rights of African-Americans, they are looked at very differently with —

LIEBERMAN: Yes, I think they will. I think, also, that people we look back 25 or 30 years from now and say, I can’t believe that there was a time when Americans were not allowed to serve in the military because of something very private, like their sexual orientation.

Attitudes have changed in America. In my life, I’d say probably — or the last two or three decades of my life — the most significant change in attitudes on a social question like this has been about gay rights and — and sexual orientation. I think the country is ahead of the Congress and Congress, by repealing “Don’t Ask, Don’t Tell,” is going to catch up with the rest of the country.

KING: As you know and know well, not all attitudes have changed. Your close friend, Senator John McCain, was right here with us last night, and he said he will vote no and this is why.

KING: You’re as close a friend as John McCain has, Senator Lieberman. Why have you not been able to convince him he’s wrong?

LIEBERMAN: Well, because he’s so stubborn, of course.

LIEBERMAN: No. Look, we’ve — we — we’ve had good conversations about this John, and I — he is my dear friend. We just disagree.

And in my opinion, every evidence says that this change can occur without any negative effect on our military effectiveness. Some of our closest allies in the world allow gay and lesbian soldiers to serve — the United Kingdom, Canada, Australia, Israel, just citing a few examples. Also, the study done of 125,000 people in our military answering questions was very clear that — that more than two-thirds are supportive of this, think it can be done without negative effect.

And even among some who felt worried that it would have an effect, more than 90 percent of those who actually have served with gay and lesbian colleagues in the military in their own unit, as opposed to those who haven’t, said it has no effect or it has a positive effect. I mean, bottom line, and this is why racial integration and gender integration has worked so well within the military, the military has a job to do. And, you know, in America, John, and I don’t have to tell you, we’re — we’re supposed to judge people not by who they are, but how they do the job.

I’ve heard soldier after soldier say to me, I don’t care about the sexual orientation of anybody in my unit. I just care whether they’re good soldiers and they’re going to have my back when — when we’re out on a mission. And that’s why I think, with all respect, Senator McCain is wrong. I want to say that the leaders of our military, the secretary of Defense, the chairman of the Joint Chiefs of Staff, are fully and urgently for a repeal of “Don’t Ask, Don’t Tell” because they don’t want a court to order this.

In this repeal bill that we’ve got, the military is in control of how this happens. There’s no time limit on it. They’ve got to decide and certify in public — Secretary Gates, President Obama, Admiral Mullen — that they can repeal “Don’t Ask, Don’t Tell” without compromising military effectiveness or the morale of our military. And that’s the way it ought to happen.

KING: If you search through the liberal blogosphere right now — and I know you do that three, four, five, six times a day, Senator — no, if — if you look through that right now —

KING: — you will see a lot of people questioning the president’s commitment to this issue. They say when he wanted to pass the START Treaty, he called in Henry Kissinger and the old Republican foreign policy guard. And then when things weren’t going well, he brought in Colin Powell and did it again. And they say, sure, he’s on the record for repealing “Don’t Ask, Don’t Tell,” but where are the high profile events, where is the public pressure on the United States Congress? Is that a fair criticism?

LIEBERMAN: I — I don’t think it is. I know, because I worked so hard on this, that President Obama fully supports the repeal of “Don’t Ask, Don’t Tell.” That, in fact, he’s been on the phone talking to senators who were questionable and had effect with that.

And it was the president and Senator Reid who decided together, notwithstanding the president’s strong desire to have us ratify the START Treaty, to go first to the repeal of “Don’t Ask, Don’t Tell,” get it done, don’t let anybody hold it hostage to their votes on the START Treaty and then go back to the START Treaty. So I think the president has shown real leadership on this. And listen, he’s the one that has — has helped to make this repeal possible by saying he was — he was for a repeal, as commander-in-chief.

KING: We’ve known each other a long time.

LIEBERMAN: Yes, we have.

KING: I’m going to ask you to let down your guard a little bit and reflect on the moment that a man, Senator Joseph Lieberman, who is viewed by many liberals as a pariah — once the Democratic vice presidential nominee, then challenged in a primary, beat in a primary by a liberal and then you came back and won that race as an Independent. Many liberals, sir, just simply don’t like you and you know that. And yet here it is, Joe Lieberman, carrying the repeal of “Don’t Ask, Don’t Tell” to the finish line in the United States Senate. There’s more than a little irony there.

In this case, right from 1993, when “Don’t Ask, Don’t Tell” was first proposed, John, I — I voted against it on the Armed Services Committee. I felt it was unfair and bad for our military. So I’m very lucky and fortunate to have played a leadership role in now ending this injustice and doing something that will make the American military even greater than it is today. And frankly, make our country even greater than it is today.

LIEBERMAN: Yes. No, much as I like you, John, and admire the work you do, I’m not ready. I appreciate the conversations I’ve had with my Republican and Democratic colleagues. Maybe this is a unique opportunity that an Independent has. I’m going home for the holidays, going to spend some time talking to family and friends, and will make a decision sometime early next year.

KING: Leverage is not a bad thing to have in Washington, DC. Senator Joseph Lieberman of Connecticut, appreciate your time, sir.

LIEBERMAN: Thanks, John. Great to be with you.